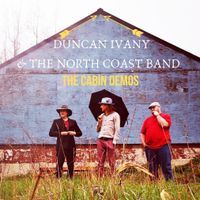 I'll be opening for Duncan Ivany & The North Coast Band.

Duncan Ivany & The North Coast Band formed in November 2018 with a mission to bring soulful music to Canadians and music lovers all over the world. While living and recording in a cabin int he hills of Erin, Ontario three gentlemen have been making Indie-folk-rock music. They are letting their true musical personalities shine and it is showing in their new music. The music is inspired by the likes of: Bahamas, Bruce Springsteen and Jack White. They are set for their Canadian tour in Fall 2019 starting Oct 23rd.

These gents originally joined forces in high school to create a band called Hypnotoad. They played original and cover music, mostly for fun and to gain experience playing with other musicians. Eventually high school ended and the band faded… but after Duncan and Connor moved to the Guelph area, they reconnected with Wesley to form The North Coast Band and create new music.